The Allée des Justes in the Marais

A street sign which has been taped off and below it another one with a new, intriguing name is not common occurrence in the Marais.
A 60 metre section of the rue Grenier sur l‘Eau was transformed into the ‘Allée des Justes’ about twelve years ago.

The title ‘Justes’ officially signifies ‘Les Justes parmi les Nations’ or ‘Righteous Among the Nations’. The World Holocaust Centre in Jeruzalem, Yad Vashem awards this title to non-Jews who risked their lives during Wold War II by helping Jews to hide, flee or survive. On January 1 2012 France counts 3.513 Justes. (The Netherlandshas e.g. 5,204 distinguished citizens, Poland has 6,339) 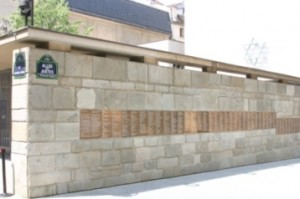 The Allée des Justes borders the Shoah Memorial, a museum, information and research center on the history of the genocide of the Jews in World War II. Therefore, it wasn’t surprising that the ‘Mur des Justes’ was unveiled on this spot in June 2006. This memorial lists the names of the French ‘Justes’ and the locations of their deeds. Moreover, as Yad Vashem still awards this title to people throughout the World each year, French names are continuously added to this wall.

As a result, one side of the wall of the Shoah Memorial remembers the Jewish victims on de ‘Wall of Names’ and the other side the French rescuers of Jews on the ‘Wall of the Righteous’.