A new future for Les Halles?

No, they never really had eternal value. After about thirty years Les Halles will be redeveloped again. In the seventies and eighties the current complex emerged in this place, where the stir and the spirit of the famous Parisian market halls reigned. Due to the increasing traffic chaos this market had already been moved to the more easily accessible Rungis outside the city in the late sixties.

Below the ground the biggest metro and train junction Châtelet-les Halles was realised. Nowadays hundreds of thousands of travellers pass there every day. Furthermore, a multifunctional centre was built with restaurants, cinemas, theatre and exposition spaces, a swimming pool and more than 160 shops. Aboveground various gardens were laid out. And a deepened square, the so-called Forum, was built, surrounded by its characteristic arch and gate structures of concrete, steel, glass and mirrors.

And regardless of whether one appreciated this architecture or not, in recent years visitors did not like to be there anymore. Les Halles had become a desolate, unsafe area; outdated and subjected to deterioration by drug trafficking and the rise in crime… Something had to happen! At last, after years of discussion and several design contests the redevelopment and modernisation of Les Halles could start in 2010 with a budget of about 760 million euros.

In 2011 activities aboveground had already become visible. Wooden fences were placed around the entire area, followed by the  demolition of the public gardens. As of September 2011 the arch and gate structures of the Forum had been taken down. 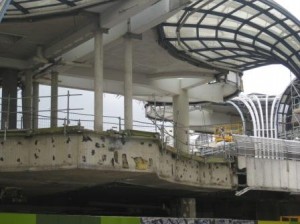 The redevelopment should be completed in 2016. The part that particularly strikes the eye is ‘La Canopée’. The term ‘canopy’ is generally used to describe the top of a forest. As a translucent roof of leaves La Canopée will shelter the completely modernized centre and will connect it to the newly designed public garden. It was designed by the French architects Patrick Berger en Jaques Anziutti. David Mangin of Paris Office Seura came on board for the urban development plan. 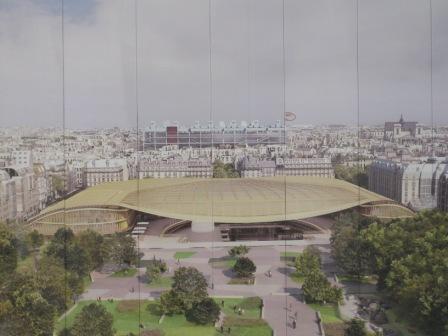 By renovating the City wants to revive the liveliness of old times. After all, from the 12th century on markets had been held at the site and in the open air. The atmosphere of the years in which this was the very place to vend the food in all of Paris, will never return. But a new élan for this legendary place, based on the dynamics of the 21st century; that’s what ‘La Canopée’ has to ensure.